Digital Banking Apply for a Loan 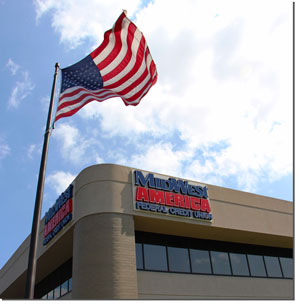 MidWest America provides the best financial services possible for our members through every stage of their life. We offer loans at competitive rates and have an assortment of savings and checking products available. MidWest America currently operates 17 full-service offices, with 13 in northeast Indiana; 2 in eastern Illinois; and 2 in southwestern Kentucky. There are approximately 180 employees, 57,000 members, and over $700 million in assets. The Credit Union continues to look for opportunities to bring competitive, quality financial services to new communities that allow our current and future members to reach their financial goals.

Where We Came From

In 1936, a group of GE employees in Fort Wayne, Indiana, petitioned for a federal credit union charter. On May 15, it was announced that the formation of the General Electric Employees Federal Credit Union was assured and temporary officers were elected. Decisions were made to limit membership to regular employees at the Winter Street and Broadway plants and those who had at least one year of service. The charter was granted on May 29, 1936.

It was reported that in the early days of the Credit Union, the volunteer committee carried their cash assets around and did business out of a shoebox. Permanent officers, directors, and members of the credit and supervisory committees were elected. First payroll deductions began July 31, and first loan applications could be made after August 7. Membership fees were $0.25. Fees collected were set aside as a reserve against possible bad loans. Members had to save at least $0.25/week.

The first office was actually located inside the plant. Eventually, the young Credit Union needed more room and leased office space near the plant. In 1946, the Credit Union was located at 2001 Broadway—above the Stine Drug Store, on the corner of Broadway and Taylor. Later, it relocated to a moveable office at 1021 Swinney Avenue across from the plant. In 1969, a permanent structure was built on that site. The first branch was opened in the fall of 1970 in Decatur, IN, across from the General Electric plant.

In 1983, the Med-Pac Credit Union merged with the GE Credit Union. That credit union served the 3 major hospitals [Parkview, St. Joseph, and Lutheran] in Fort Wayne. Two small credit unions in Huntington (Memcor in 1983 and Majestic in 1984) were acquired. Initially, members were served from a portable branch until a new permanent branch could be constructed on Huntington’s north side. That office opened in 1989. In 1985, members of Eastside FCU (formerly, Falstaff Credit Union) became a part of the growing family. Since that time, over 400 companies have become part of our field of membership. This includes all the major area hospitals and the local General Motors plant.

Our name was changed in early 1987 to MidWest America Federal Credit Union to better reflect this expanded field of membership and market area. In October of that year, our two-story corporate headquarters opened on North Clinton at Medical Park Drive. This provided adequate space to house the support functions as well as a convenient location for a branch on the north side of Fort Wayne.

In 1999, the first out of state facility opened in Scottsville, KY. Employees at the A.O. Smith plant (formerly General Electric) petitioned for local service. Initially, leased space was obtained for a branch. Eventually, a larger facility was needed and the land was purchased and a full-service branch was built in 2006.

In 2000, Community First Credit Union (a former GE credit union) merged with MidWest America. They were headquartered in Danville, IL. They also operated branches in Mattoon, IL, and East Flat Rock, NC. In 2004, the CIPS Employees FCU (Central Illinois Public Service in Mattoon, IL) was acquired. The North Carolina office was subsequently closed due to difficulty in servicing and staffing the facility. Additional branches in the growing northeast and northwest areas of Fort Wayne necessitated branches at Lima & Dupont and Stellhorn & Wheelock Roads.

In 2006, Reliable FCU (formerly, Phelps-Dodge) was acquired. This credit union had an office in New Haven and also one in Hopkinsville, KY, Both of these offices were re-branded as MidWest America branches. In early 2011, the Credit Union consolidated our branch in Charleston, IL with the Mattoon branch.

In June 2014, the original branch on Swinney at Broadway was closed. By late 2012, the mammoth GE campus had been vacated. Another nearby major employer, BAE Systems, announced that they were leaving the area for a brand new facility near the airport. With these two developments and since there were 2 other full-service MidWest America branches within a 3-mile radius, the decision was made to close this office and sell the building. The free-standing full-service drive-up ATM, however, is still operational 24/7.

With the growth of both our mortgage and commercial lending areas, the need for additional support space was obvious. Two buildings adjacent to the main office were purchased and several support departments were relocated there. The Wayne Haven Branch which was also consolidated with the New Haven office and was made a testing and training facility.

We broke ground in Angola, Indiana in the fall of 2019. By late 2019, MidWest America purchased a third building adjacent to the main office which is now occupied by more of our ever-growing support staff. This move created additional space which allowed the Credit Union to commence a complete remodel and reconfiguration of the first floor of our corporate headquarters. In late 2020, we expanded again and opened a branch location in Kendallville, Indiana. Our most recent office on Illinois Road was opened July 2021. Construction of a location in Bluffton, IN is currently underway.